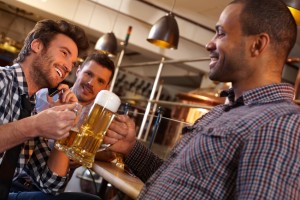 For many, 5 o’clock happy hour is considered the cornerstone of American working life. No matter where one is or what one does, it’s always considered an act of luxury and relaxation to loosen the proverbial tie and head to the bar for happy hour to grab a craft beer or a cocktail. Typically held between the hours of 4 and 8 pm, happy hours have become common ways for not only workers to relax, but for bars and restaurants to boost their sales on what would typically be slower weekday shifts, and to help them to relax and get “happy” before dinnertime commences.

But happy hours weren’t always an American post-work staple, and nor did it begin as a marketing strategy. Rather, the historical roots of the happy hour date all the way back to the early 20th century.

Today, happy hour is associated with letting loose without letting too much cash loose from your wallet. But the term “happy hour” actually derived from American Naval slang in the 1920s, after the first World War. Happy hours were actually periods of time on naval ships where sailors could engage in relaxing activities in order to relieve themselves from the drudgery of life at sea. Typically, these activities were morale boosting, such as boxing and other athletics.

Meanwhile, the United States was going through the Prohibition period, a largely failed experiment that prohibited the sale and consumption of alcohol. Of course, Americans got around it and began frequenting speakeasies to get their fix of beer or liquor before eating dinner. “Happy hour” became a phrase that described these illegal gatherings.

Today, frequenting the bar for happy hours is anything but illegal and is widely enjoyed by men and women across the country. From nice dining restaurants, to craft beer pubs, happy hours offer a range of cocktails and select craft beers to help ease patrons into the workweek. And what do patrons like to drink the most? In a 2014 survey, 41% said that they preferred beer, 31% wine and 28% said liquor. And considering the craft beer market is currently a $19 billion industry, this comes as no surprise.

But happy hour isn’t just for drinks. Rather, many craft beer restaurants offer food specials to accompany their brewskies and mixed drinks. One of the most popular happy hour eats of all? You guessed it: burgers. With Americans eating around 4.3 burgers per week on average, you won’t be pressed to find one on special at a bar for happy hour.

So now that you know the history of happy hour, doesn’t your discount draft taste even more refreshing?