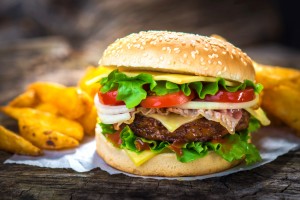 In the United States alone, people eat a little over four burgers a month on average. That probably explains why whether it’s a fast food joint, or a craft beer pub, it’s likely you’ll find a burger on the menu. Burgers have been an American culinary favorite for nearly a century, but few know their true origins.

The history of hamburgers have been hotly debated over time. As early as the 4th century, the Romans created a similar dish to the hamburger, called isicia omentata, a baked beef patty with lentils and spices. In Hamburg, Germany, thin meat patties became popular, and were eventually brought to America. While many countries claim to be responsible for the hamburger’s inception, America holds itself accountable for what the burger is today.

As the story goes, Americans in the late 20th century began eating beef patties between two slices of bread. As industry became more commonplace in America, citizens needed foods that were nourishing, fast, and easy to eat. This made the hamburger a perfect culprit for consumption. In 1916, Walter Anderson first invented the hamburger bun. He was a short order cook who would go on to create the popular chain restaurant, White Castle.

In the wake of convenience foods in the 1950s, hamburgers and cheeseburgers exploded onto the American foodie scene, where they have since settled as an American classic next to apple pie, and it’s hard to find a good restaurant without a burger on its menu.

Today, hamburgers have become an art of sorts. Nice dining restaurants and local catering services alike offer the handheld culinary classic. They have become so popular, in fact, that a food culture has developed around them, and burgers lovers have developed a very refined palette. Beef origin and quality, for example, has become a priority for 75% of burger lovers. And toppings are a close second, with 42% of people dubbing it the most important attribute. Many even like to pair their burger with good craft beers at their local craft beer pub.

How do you like to burger? Let us know in the comments below!