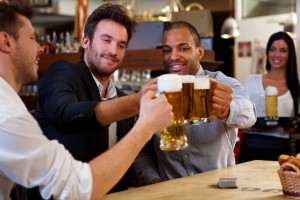 For lovers of the drink and lovers of the science behind it, craft beer seems like a no-brainer. But for those who love to kick back a few nondescript, waterlike brewskies, the $19.6 billion trend can be a bit mystifying. What exactly makes a beer a ‘craft beer’ and how did the craze come to be?

Luckily, we’ve provided a 101 crash-course in craft beers that will be sure to make you thirsty!

Craft Beers, Defined
A craft beer is a beer that is made by brewers that has three distinct traits: small production, independent, and traditional.

While these traits are described more in-depth by the Brewer’s Association, a craft beer typically focuses on making traditional flavors fun, new and interesting. In fact, some of the most popular craft beers are reimaginations of classic styles. Craft beers are also typically more slightly alcoholic, ranging between 5% and 10% alcohol by volume.

Craft beers can illicit a conversation about their flavor, mode of production, and origin.

The Specialty of Craft Beers
Like a fine wine, craft beers are often highlighted based on where they originated, their fermentation process, and the like. While many craft beers come from microbreweries, some craft beer pubs create their own beers, drawing beer enthusiasts into their establishments.

The Art of Pairing
Similar to wine, craft beers are also an excellent vehicle for food pairing. For example, if you’re opting for a rich, dark stout, you may not want to go for seafood that evening. Many craft beer restaurants offer pairing menus for their imported and American craft beers and menu items. And when choosing a restaurant, many beer enthusiasts will pick their location based on the beers offered.

Craft beers are an especially seasonal drink, too. In fact, around 85% of beer enthusiasts like to enjoy their craft beer selections based upon the season.

So what do you look for in a craft beer? When choosing a restaurant, is their craft beer list the first thing you look to? Let us know in the comments below!