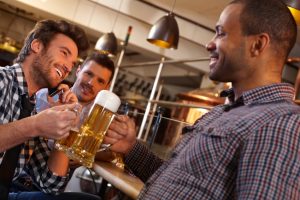 Beer. Loved by some; adored by many. Where whiskey drinkers believe their scotch and sodas are the “Water of Life,” we like to think differently. It is actually beer that makes the world go round. Don’t believe us? Read on to learn how the history of beer has transformed the world as we know it.

Ancient Egypt
Beer is one of the oldest drinks known to man. There are records of beer production in Ancient Egyptian and Mesopotamian texts, which makes us wonder how different the local watering holes were in a country that didn’t have much water to speak of. Scientists have examined pottery from ancient times and found through chemical testing that the oldest known beer was produced in about 3,500 BC. It didn’t get much recognition until the Ancient Egyptians spread it across the world through trade and exploration.

Medieval Europe
Beer was one of the most common drinks in Medieval Europe, even though it probably doesn’t compare to the good craft beers you are accustomed to today. It was consumed daily by members of all classes, and especially in Northern Europe where grape cultivation for wine was almost impossible. Europeans are the ones we can thank for introducing hops into beer. Beforehand, beer was simply spiced with herbs, but they weren’t all that great for preserving the delicious drink.

Early Modern Europe
Beer has evolved by now, and Germany has pioneered the way into producing beer for mass export. Now, more and more thirsty Europeans could get a taste of beer, so the consumption skyrocketed. Different countries were experimenting with multiple different brewing processes such as higher water temperature, longer boiling times, and more frequent brewing. Also, it was around this time that neighborhood bars began to pop up on the scene.

The Industrial Revolution
The invention of the steam engine in 1795 brought beer all over the world. It made it easier for bars to stock up different international bars, and for some smaller merchants to start producing soon-to-be-popular craft beers.

Today
We don’t really have to go into details about beer today, do we? All we know is that the craft beer market is exploding, with 84% of all craft beer drinkers choosing their beer depending on the season. So come on down to Dead Presidents, grab a pint, and thank your ancestors for inventing the beautiful thing we call beer today.