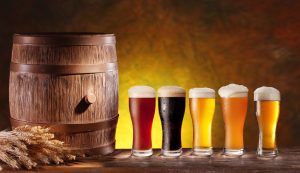 Everyone likes beer, including the leader of the Free World. Some presidents, according to history, even liked their beer a little too much. And what is a leader if they cannot guide their countrymen into drinking great American craft beers once in a while? Perhaps we are taking our name too seriously — we do love history and good craft beers after all — but we’ve complied a great list of dead U.S. presidents and their pints of choice for some good old fashioned American inspiration.

George Washington
Our country wouldn’t be the same if it wasn’t for this man, his apocryphal cherry tree, and his beer collection. Old George here loved himself a good brown porter laced with molasses. He would work at his Mount Vernon estate and drink it almost as soon as it was bottled.

John Adams
Johnny here was the second president and loved himself some alcohol. He started every day with a hard cider and topped the afternoon off with a porter. But he is most notably remembered as being the brother to the infamous Boston brewer Sam Adams, who is responsible for those Summer Ales and Oktoberfests you know and love.

Thomas Jefferson
This man was too busy being presidential to brew his own beer, so his wife would step in and brew up to 20 gallons every few weeks. Once she died, he imported his own personal British brewer to his Monticello estate.

Franklin Pierce
Frankie was not re-elected for a second term, and this 14th president didn’t know what to do with himself once moving out of the White House. He even famously said, “What can an ex-president of the United States do except get drunk?”

James Garfield
This guy kept a keg on hands at all times in the Oval Office, specifically for “medicinal purposes.” Good for him.

Grover Cleveland
Grover loved his beer so much that his political running mates were quite skeptical of his ability to hold public office. So he decided to take an oath to limit himself to four beers a day, and when this became to arduous he changed his quantity from a pint glass to a whopping tanker down at the pubs.

Lyndon Johnson
LBJ may have married Lady Bird, but his true love was drinking Pearl beer right out of the can. Considering the White House wasn’t a good enough party hall for him, his favorite activity was to take a few cans and drive around in his cream-colored Lincoln Continental.

Richard Nixon
Watergate was nothing for this fella. While his drink of choice was expensive red wine that cost hundreds of dollars per bottle, he would instruct his staff to serve mediocre red wine to his guests with towels wrapped around the bottle’s label so they didn’t know what they were getting.

With such a colorful political history, it is no secret that the craft beer market in the U.S. is worth almost $20 billion dollars. Here at Dead Presidents we take Founding Father Ben Franklin’s words very seriously (even if he never became president), “God made beer because he loves us and wants us to be happy.”

So come on down and get some beer. For America.