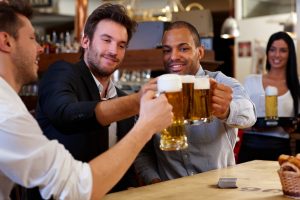 We’ve all been there. We have all been at one of our local watering holes, or in the aisle of the supermarket, and have looked at the vast array of beers in front of us felt just plain confused. There are craft beer, imported beer, IPAs, draft beer — the list goes on, and you don’t know where to start. Here’s a simple breakdown to help you understand the different types of beers the next time you are hanging at the bars. Don’t worry; we got you.

Draft Beer
Draft beer comes from the tap. The word draft is derived from the English word draught, which means to pull from a tap. For those who like draft beers, they believe it is fresher and tastes better since it comes at a cooler temperature. A draught dispensing system will keep your beer nice and cold at 34 or 38 degrees Fahrenheit. Draft beer is a large umbrella, all of your imported beers, craft beers, and even ciders can be on tap.

Craft Beers
American craft beers are exploding all over the place. As a market, draft beer is worth almost $20 billion dollars. If you are drinking a craft beer, that means you are drinking a beer that was made in traditional, non-mechanized way — meaning smaller batches, different unique flavors, and anywhere from five to 10% alcohol by volume. By typical definition, a craft beer brewer is classified as such when they produce 6 million barrels or less annually.

Domestic Beers
Domestic means it is from the good ole USA. These are the big breweries that you’ll see in bars all over, like Budweiser, Miller-Lite, Busch, Keystone Light.

Imported Beers
These are anything foreign! They can be either a foreign craft beer, or foreign beer on tap. Some popular ones include:

There you have it. Just remember this list and you’ll be golden next time you are looking for a beer to try!